Armed with brooms and shovels, they sweep up the usual detritus of discarded vegetables and fruit, along with bottles and plastic packaging, and throw it into the maw of the trucks that haul it away to the dump.

But complicating the trash disposal problem is the increasing amount of electronic waste. E-waste includes everything from computer monitors to television sets to cellphones and beyond.

Regular garbage collectors are not equipped to deal with e-waste. And much of it is stored in warehouses or scavenged for recyclables, then dumped.

Solar energy products that help low-income, rural people without electricity are also adding to the e-waste blight. As solar energy booms in the region, so do expired lead-acid batteries for rooftop solar panels and lithium batteries for solar lamps. E-waste can damage the environment by leaking dangerous chemicals into groundwater and harm people who scavenge recyclable materials by hand.

Already an environmental concern in wealthier countries, the problem is growing in places like East Africa as incomes rise and more people can afford electronic devices.

But many of these regions also lack facilities and equipment to properly dispose of the waste.

In Dar es Salaam, for example, laborers who collect heavy lead acid batteries used in cars, power backup systems and rooftop solar systems frequently break them open with machetes and drain the acid into the ground by hand. Then they sell those batteries to factories that melt lead scrap in furnaces to be resold to dealers.

The process pollutes the soil and water with lead, which can lead to brain damage and other health problems, according to a report from Phenix Recycling, which operated briefly in Tanzania.

Water and soil around the Msimbazi River are already polluted from battery, steel, paint, food processing and other factory waste, according to a paper published in 2018 in the Journal of Scientific Research and Reports. Samples showed levels of chromium, copper and lead far above the World Health Organization’s safety levels.

“The chance of having contaminated groundwater is very high,” said Ghanima Chanzi, an engineer at the Water Institute in Dar es Salaam who wrote the paper.

In Tanzania, “there’s no training for hazardous materials,” said Allan Suddih, general manager of Green WastePro, a waste management company here that does not deal in e-waste.

Water from the river is used to irrigate nearby vegetable fields, she said, adding that Tanzania has virtually no safe disposal systems for industrial waste.

In East Africa, the vast majority of expired lead acid batteries are car batteries and power backup systems, used during frequent blackouts. Solar products account for a fraction of overall e-waste, although the amount is growing as the industry booms.

Power Africa, an initiative of the United States Agency for International Development (U.S.A.I.D.), and various partners aim to have 25 million to 30 million new solar connections across Africa by 2030.

Companies mainly in sub-Saharan Africa and South Asia sold 3.7 million solar energy products, including solar lamps and rooftop systems, in the first half of 2018, according to a report from the Global Off-Grid Lighting Association (Gogla), a nonprofit organization representing the off-grid solar industry.

Solar energy has clear benefits, of course. It is a clean alternative to fossil fuels, which contribute to climate change.

It provides renewable energy that is often cheaper than electricity created from dirty diesel generators and kerosene.

However, the lithium batteries in solar lanterns are difficult to recycle. They are often dumped or even burned with other trash.

Rooftop solar systems connect to lead acid batteries that last five to eight years if properly maintained, and then are discarded.

Some lead acid battery companies provide formal recycling services in East Africa. But they are limited.

“There are not sufficient facilities with robust health and safety standards to handle lead-acid batteries,” acknowledged Drew Corbyn, program manager at Gogla.

Solar companies, industry donors and investors are starting to address e-waste, especially because environmental pollution and health risks are undermining their green brands.

“By taking a proactive stance and working with local and regional governments now, the industry can avoid punitive measures in the future,” said Declan Murray, a researcher at the University of Edinburgh who studies e-waste in Africa.

Companies that can show proper e-waste management plans presumably will have an advantage, Mr. Corbyn said. However, it is a “challenge that requires further work and investment.”

To help address the problem, aid agencies in the United Kingdom and the United States have vowed to give $1 million in grants to companies addressing solar e-waste in sub-Saharan Africa. The aid is available through the Global Leap Awards program, supported by groups like the U.S.A.I.D.

For example, the German solar company Mobisol is working with Associated Battery Manufacturers in Kenya, and with Enviroserve, which opened an e-waste recycling center in Rwanda in December 2017.

That center is building a lead acid battery treatment center about an hour from Kigali, the capital, said Olivier Mbera, the center’s manager.

In Nairobi, Kenya, the Waste Electrical and Electronic EquipmentCentre, the country’s only registered e-waste recycler, collects batteries but sends complex materials to Europe. 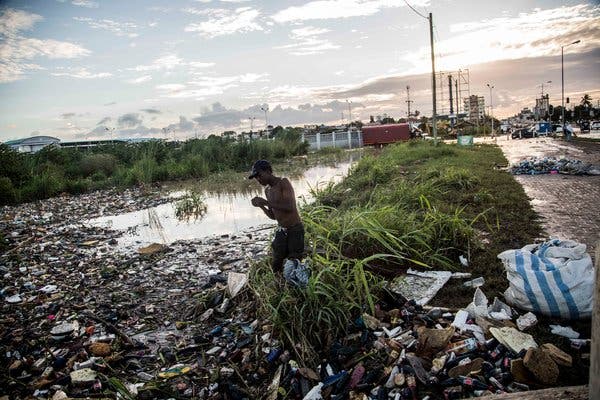 A man sifting trash in the Msimbazi River in Dar es Salaam. Credit: Jacques Nkinzingabo for The New York Times
Mobisol is also using technology for better maintenance. Solar home systems have a controller with a modem and SIM card.
“It communicates with our database and informs us about the system performance, energy consumption, appliance use,” explained Paula Berning, corporate sustainability manager at Mobisol.

“We find out automatically if something is wrong with the product.”

The need to confront the waste problem does not necessarily guarantee a business’s success, however. Phenix Recycling was founded by Athina Kyriakopoulou, who worked for several years at solar energy companies in Tanzania and Uganda, where she saw the “alarming” accumulation of e-waste.

Phenix received e-waste from clients including the solar companies M-Kopa and Mobisol. It sent difficult-to-recycle circuit boards and lithium batteries to Belgium, and solar panels to South Africa, Israel and Belgium.

A lot of e-waste must be sent abroad for proper recycling that meets international standards. Phenix also received conventional recyclable materials like plastic and paper.

Despite the huge need for recycling services, many businesses still struggle for support and funding.

Case in point: Phenix closed down last year partly because of “the lack of investors willing to fund waste companies, and a hesitation from companies to pay for their waste because of lack of regulation or lack of enforcement,” explained Ms. Kyriakopoulou.

A lot of money goes into understanding the issue “but not yet to support growing companies. Phenix came a few years too early,” she said.

But Ms. Kyriakopoulou is optimistic that e-waste recycling in East Africa will improve with stronger regulation and more competition. There may be hope yet for Phenix to rise from the ashes.

https://www.nytimes.com/2019/05/12/climate/electronic-marvels-turn-into-dangerous-trash-in-east-africa.html?searchResultPosition=1
LINK TO ARTICLE
A version of this article appears in print on May 12, 2019, on Page A9 in The International New York Times. Order Reprints | Today’s Paper | Subscribe