Amy Yee @amyyeewrites is an award-winning American journalist based in New Delhi, India from 2006-2013.

As a journalist, she focuses on solutions to big social problems, such as climate change adaptation and mitigation through renewable energy; reducing deaths of children and mothers in developing countries; and improving safety in Bangladesh’s garment factories; and much more.

Amy is a former staff reporter and foreign correspondent for the Financial Times, based in New Delhi and New York.

She is currently at Harvard Kennedy School in Cambridge, MA where she is pursuing an MPA.

Her produced radio work has aired on NPR (National Public Radio) and Voice of America.

Amy was a 2020 fellow at The MacDowell Colony in New Hampshire and the Logan Nonfiction Program near Albany, New York.

Her narrative nonfiction book about Tibetan refugees in India, as well as Australia and Europe, was a finalist for the 2017 Restless Books $10,000 Prize for New Immigrant Writing for a debut work of nonfiction by a first-generation immigrant.

She was a 2014 Knight Bagehot Fellow in Economics and Business Journalism at Columbia University in New York where she also earned a masters’s degree.

Amy also has an MFA in Creative Writing from Hunter College and won a national fiction award as an undegrad.

Since 1998 she has written across a range of subjects. From south Asia she writes about poverty and ways to promote human and economic development; business; business approaches to reduce poverty; clean energy; public health; arts, culture and travel.  She also writes extensively on Tibet issues.

In 2014 she won first prize in the United Nations Correspondents’ Association (UNCA) journalism awards contest for reporting about climate change adaptation in Bangladesh. Her work was recognized by UN Secretary General Ban-ki Moon at a ceremony in New York. In 2015 she was a Silver Winner in the UNCA awards again for reporting about climate change in Bangladesh. In 2013 she was a bronze winner in the UNCA journalism awards contest and recognized at a gala ceremony in New York.

In 2016 she won “Outstanding Business Story” in the South Asian Journalists Association’s (SAJA) annual journalism contest for her long form analysis about reforming Bangladesh’s garment factories. In 2017 she won the SAJA award for Best Literary Non-Fiction for her essay about a literary walk through Delhi. In 2013 she was a two-time winner in the SAJA awards in the Commentary and Arts/Culture categories for articles published by the New York Times about the economic impact of intestinal worms in children in poor countries and about the world’s largest Passover Seder (in Kathmandu, Nepal) in The Atlantic.com.

Amy has been a finalist seven other times in the South Asian Journalists Association’s (SAJA) annual journalism contest in the Features, Enterprise Reporting and Business categories in 2017, 2014 and 2012. 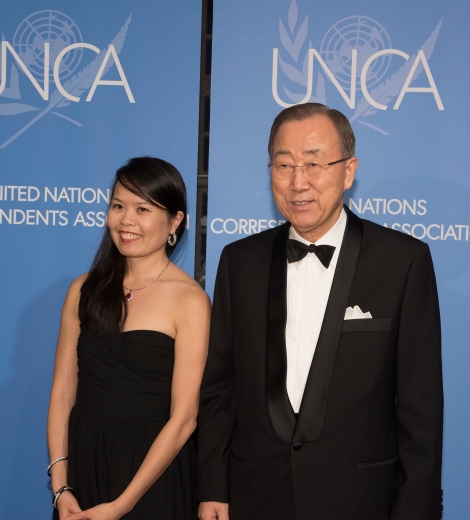 At the UNCA awards ceremony in New York  with UN Secretary-General Ban Ki-moon in December 2015.

She was part of a team that won First Prize for public health reporting in the 2013 Association of Healthcare Journalists annual contest for her in-depth analysis of how Bangladesh and India have reduced the deaths of new mothers.

In 2020 she won Honorable Mention in the Society of Environmental Journalists (SEJ) awards for articles from Uganda, Tanzania, Mozambique and Israel. The judges wrote that her work “brought us from the vineyards of Israel to coastal Mozambique, showing that there are no boundaries in environmental reporting. That she managed to accomplish this work on a shoestring budget as a solo freelancer is testament to her commitment and passion for environmental journalism.”

In 2019 she was a finalist for the Fetisov Journalism Awards.

In 2008 she was part of a global team of Financial Times reporters named finalists for Best Newspaper Story of the Year in the UK for a series on the environment.