Driving in Kenya can be a rough ride, over bumpy dirt roads and potholed urban streets, made worse by dust, heat, and torrential rain. And that’s if you’re lucky enough to own a vehicle that will stand up to those conditions. Because so few are produced on the African continent and import taxes are exorbitant, prices can run sky-high—to the tune of US$80,000 for a 2011 Toyota Land Cruiser, for instance. To address these problems, Nairobi-based startup Mobius Motors has reimagined an affordable vehicle for the needs of the African consumer, says COO Sunru Yong (MBA 2007).

Mobius’s founder, British entrepreneur Joel Jackson, moved to rural Kenya to work in a micro-forestry enterprise in 2009. During his field visits, he encountered the problem of expensive secondhand vehicles, many of them sedans ill-equipped to handle local conditions. Jackson decided to create a prototype of an off-road vehicle, recruiting local mechanics and welders in the coastal town of Kilifi. That laid the foundation for the company’s latest model, the Mobius II, a sleek SUV designed and made in Kenya, with rugged suspension for tough terrain, a ladder chassis to carry heavy loads, and a price tag that starts at US$13,000—about the equivalent of a seven-year-old imported sedan.

“At Mobius, we get to play a part in the emergence of a stronger manufacturing base.”

In the process, Mobius has revamped more than just the design, says Yong, a former Bain consultant and Acumen Global Fellow who joined the automaker in 2016. “We have also rethought the conventional automotive business model itself,” with specific decisions in technical design, supply chain, and the design of the production facility that are different from typical original equipment manufacturers (OEMs). And the vehicle’s design allows for an efficient production process at low volumes and with manual labor. Because of these innovations, Yong says the factory requires less capital investment than a conventional facility.

Now Mobius is about to embark on an ambitious growth plan by opening a new factory. With $20 million in investments and loans to date, the company designed, built, and sold their proof of concept, then developed the Mobius II and commissioned a factory to produce it. In addition to its 50 full-time employees, the new factory will add another 50 people per shift, doing everything from laser-cutting steel frames to inspection, painting, general assembly, and quality testing. The company worked with contract assembly to build its first 50 vehicles, so the factory will allow Mobius to control the production process and lower costs. 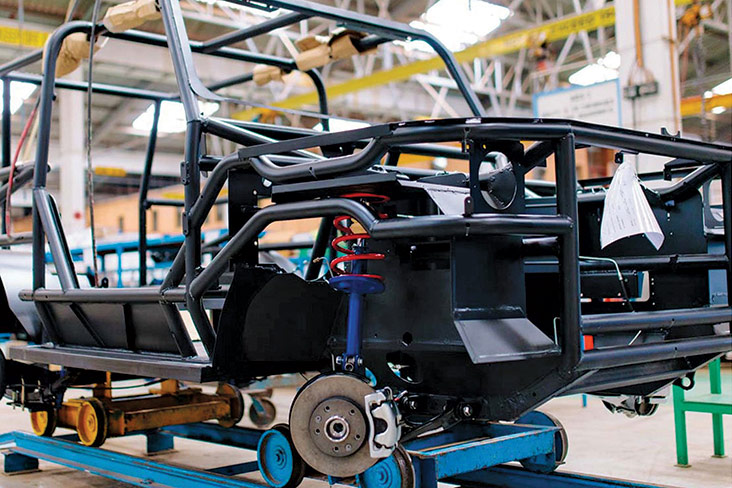 Yong believes the new facility could also spark manufacturing and innovation for local industry. With only 9 percent of the world’s vehicles being produced on the continent—mostly in South Africa or North Africa, according to the International Organization of Motor Vehicle Manufacturers—the lack of manufacturing deprives the region of an important source of jobs and economic growth.

“It is critical for economies in this region to diversify beyond the usual sectors, such as agriculture, commodities, tourism, donor-funded projects, and so on,” Yong says. “At Mobius, we get to play a part in the emergence of a stronger manufacturing base.”

As Mobius scales up, the team envisions producing a no-frills platform that can be tailored for cargo delivery, public transportation, or emergency vehicles—giving entrepreneurs and small businesses an option to improve challenging last-mile distribution on rough terrain.

Even before doing any marketing for the Mobius II, Yong reports that they have a couple hundred preorders and are building a sales and service network across the country to support them. Kenyans seem open to buying a new, unknown car brand, he says—a good sign, given that some locally manufactured products struggle to gain traction. When there is too little effort put into design and quality, customers end up associating the affordability of a local product with cheap. But at Mobius, “we have invested a lot into designing a vehicle that, yes, is affordable but is also something that people will be proud to own.”