AFRICA is home to what may be the world’s oldest counting tools. The Ishango bone from the Democratic Republic of Congo (both sides of which are pictured above) and the Lebombo bone from South Africa date from 20,000 years and 43,000 years ago respectively. Both are baboon fibulae that have been notched by human hand. Some archaeologists think they were used as tally sticks. 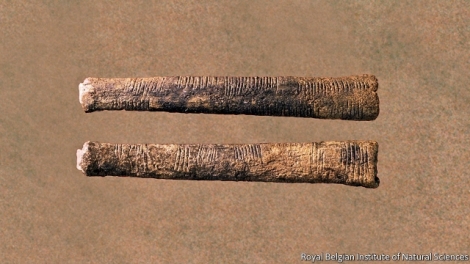 These artefacts were cited last week at a gathering of the Next Einstein Forum, held in Kigali, Rwanda, as examples of Africa’s historical role in developing mathematics. The forum seeks to promote both science in Africa and African scientists. Its meeting in Kigali was the largest general scientific gathering ever held in Africa. Nearly 1,600 people attended.

The forum exists because, regardless of how things stood in the upper Palaeolithic, in modern times Africa lags behind other continents in world-class scientific research. According to a report by the World Bank and Elsevier, a scientific- and medical-journal publisher that is part of the RELX Group, sub-Saharan Africa accounted for less than 1% of the world’s scientific research between 2003 and 2013. Yet the need for science to help find answers to local problems is great. Agricultural productivity is low. Disease is rife. Natural resources such as water and forests are mismanaged.

The forum’s goal is to help change this. Neil Turok, founder of the Next Einstein Initiative, of which the forum is part, is a South African physicist who is also head of the Perimeter Institute, a cosmology-research centre in Canada. The names of both initiative and forum come from Dr Turok’s desire, proclaimed in 2008, to find the “next Einstein in Africa”.

Last week’s meeting was the second of what it is hoped will become a biennial event (the first was in Dakar, in Senegal, in 2016). It saw the launch, by Elsevier, of Scientific African, a publication intended specifically as an outlet for African science.

It also included presentations by a score of African scientists under 42, selected by a forum committee as “Next Einstein Fellows” and willing to act as role models for youngsters. Among them were Yabebal Fanteye, an Ethiopian cosmologist who is now a researcher at the African Institute for Mathematical Sciences (AIMS) in Muizenberg, South Africa; Yvonne Mburu, a Kenyan immunologist who founded Med in Africa, a network that connects African doctors and scientists; Jonathan Esole, a Congolese mathematician who studies the geometry of string theory at Northeastern University in Boston, Massachusetts; and Justus Masa, a Ugandan chemist who works on hydrogen fuel cells at Ruhr-University Bochum, in Germany.

That range of topics shows the breadth of the initiative. But it does also highlight the question of what sort of research an organisation like the forum should be promoting. To put it crudely, do cosmology and the geometry of string theory really matter when the pressing task is boosting development or tackling social problems on the African continent?

Dr Turok is clear that they do—though not necessarily directly. As he observes, “students want to answer big questions. Inspiration is fundamental. We use cutting-edge science to motivate students. Exceptional ones go into pure science. The rest are enriched and take what they learned into the real world.”

That approach does not, though, eschew the pragmatic. To cultivate practical mathematical and scientific skills for recent African graduates, the Einstein Initiative has also helped set up the AIMS at which Dr Fanteye now works. Besides the campus in South Africa, which opened in 2003, there are now five others—in Ghana, Senegal, Cameroon, Tanzania and Rwanda. AIMS intends to create nine more.

Courses at the AIMS have unconventional curriculums, which emphasise analytical thinking and problem-solving rather than the rote learning that has, Dr Turok says, “traumatised” African students. They have no exams. Instead, candidates are assessed throughout their courses—again unusual in Africa.

Besides covering a wide range of mathematical and scientific topics, the AIMS also disseminate management and communication skills that will help students develop their careers. Together, the various AIMS have already awarded more than 1,500 masters’ degrees to students from more than 40 countries.

The different arms of the New Einstein Initiative are not alone in trying to cultivate science in Africa. Carnegie Mellon University, in Pittsburgh, Pennsylvania, established a campus in Rwanda in 2011. Carnegie Mellon University Africa, as this campus is known, awards masters’ degrees in information technology and in electrical and computer engineering. As Crystal Rugege, its director of strategy and operations, observes, information technology “cuts across all sectors when you’re trying to develop an economy”.

Ms Rugege also points out a systematic problem of African academia, which is that universities on the continent rarely encourage their professors to do research. The emphasis is on teaching, which is the criterion for career progression. Reforming the academic-promotion system would thus help spur research.

Will ye no come back again?

Equally crucial is the process of giving talented students a route to the top. To do this properly would require school reform that is beyond the remit of the New Einstein Initiative but, by creating African institutions of international standing in the form of the AIMS, it can enable those who have got to university to do graduate work without the expense and disruption of travelling to North America or Europe.

Keeping African talent in Africa in this way during people’s life-defining early 20s may also reduce the proportion of those who go on to make their careers abroad. In this context Dr Masa’s path is perhaps instructive. He grew up in the mountains of rural Uganda, on a family farm that lacked electricity and running water. He excelled at school, obtained a place at Makerere University in Kampala, entered Uganda’s national mathematics competition, and came second. To pursue research, though, he had to take a scholarship at Bochum—and, apart from a stint at Oxford, he has remained there ever since.

In his case, he might eventually go back home. He muses about returning to Uganda to teach at a university, even if it means not pursuing ground-breaking research. In Uganda, he thinks, he can make a bigger splash than in Germany. “Sometimes,” he says, “you do things for the larger good.” Not everyone will be so altruistic, though. Even putting aside the higher salaries found abroad, spouses and social networks there are powerful anchors. If the New Einstein Initiative can encourage those anchors to be forged and dropped nearer home, it will have done Africa a considerable favour.