GBAMU GBAMU, Nigeria — Music blasts from King Royal Guesthouse, a small restaurant in the village of Gbamu Gbamu, a three-hour drive from Lagos. It’s early afternoon, but purple and green disco lights flash above a television. A powerful fan blows the hot air as patrons sit on plastic chairs, drink cold beers and sodas, and check their cellphones.

The owner, Olamide Olasunkanmi, previously used a generator to power appliances. He had to buy heavy jugs of gasoline and carry them on a motorbike from the nearest town, about 30 minutes down a dirt road that becomes a muddy mess when it rains.

But Mr. Olasunkanmi doesn’t use the generator much since he connected to a new solar mini-grid in the village in February.

Now, steady solar electricity is available 24 hours a day. When he relied on the generator, he had to unplug the freezer and turn off the television and fan if he wanted to use his water pump. Now, he can run all the appliances at the same time. He pays about 20,000 naira ($55) each month for solar power — about what he paid for gasoline. But he uses more appliances and electricity, and he says his “stress is reduced” because he no longer hauls fuel from town. “We enjoy the power more,” he said.

Six pilot solar mini-grids operating since January and February in five Nigerian states give 15,000 people access to reliable electricity. The mini-grids were partly funded with 1.7 million euros (about $1.9 million) from the European Union and the German government in collaboration with Nigeria’s state governments. The Nigerian energy companies Rubitec, GoSolar, GVE and Nayo Tropical Technologiesplanned and built and run the mini-grids.

By 2020, Nigeria wants to have plans laid for more solar mini-grids that would eventually reach more than 100,000 people. Solar mini-grids are not a new concept worldwide, but they are an increasingly popular way to provide low-cost reliable electricity to rural areas. In Nigeria, they have the potential to give 26 million residents access to electricity, according to GIZ, the German aid agency that supports the initiative.

Rubitec built the Gbamu Gbamu mini-grid, composed of more than 300 large solar panels on a compact plot of land. A small powerhouse is lined with imported inverters and batteries that can store enough energy for electricity, even during the rainy season. Wires on wooden poles run from the mini-grid to homes and businesses that have paid for a connection.

Solar mini-grids are part of new efforts in Nigeria to increase electricity and bolster energy security in Africa’s most populous country. Nigeria is one of the world’s largest producers of oil and gas and the largest producer of hydropower in West Africa.

But about 60 percent of the country’s 190 million inhabitants lack access to reliable electricity, according to the government’s Nigeria Power Baseline Report, and 75 percent of rural dwellers don’t have power. Droughts have stalled hydroelectric plants. And rebel attacks on critical gas pipelines in the volatile south have crippled power plants; gas generates 85 percent of Nigeria’s electricity. In 2016, the Niger Delta Avengers destroyed gas pipelines to pressure the government to help the poor and clean up environmental pollution in the resource-rich but neglected area.

Nigeria’s power plants can generate about 13,000 megawatts of electricity, but they produce only about 4,000 megawatts because of gas shortages, as well as grid constraints, poor maintenance and technical problems.

People with means rely on fuel-guzzling, dirty generators that generate about 4,000 megawatts, roughly the same as the national grid.

Mr. Olasunkanmi, for example, lives in town 30 minutes away. His home is connected to the national grid, yet electricity is woefully unreliable. Sometimes he only gets a few hours of electricity in a week, he said. His children want to study at night, but there’s no power. Mr. Olasunkanmi’s home has a generator, but he uses it only occasionally. Petrol and diesel are relatively expensive since refined fuel is imported back into Nigeria. Mr. Olasunkanmi admitted he and his family aren’t very productive at night.

The scarcity of electricity will only deepen as the rapidly growing country demands more energy. Nigeria’s population is expected to double to 400 million by 2050 and could reach one billion by the end of the century, according to the United Nations.

Until recently, renewable energy has not been a priority for Nigeria. But in 2015, Nigeria adopted a national renewable energy policy and moved to sign the Paris accord to combat global climate change.

Nigeria aims to increase electricity capacity to 30,000 megawatts by 2030 with a third of that from renewable energy sources such as hydropower and solar. It’s an ambitious target because proposed incentives such as tax breaks on imported solar panels, batteries and equipment have yet to be put into effect.

Energy security — the uninterrupted availability of energy sources at an affordable price — is an urgent issue not only because of gas and power shortages. Oil accounts for more than 80 percent of Nigeria’s export revenues, making it dangerously dependent on a single industry already mired in corruption. In 2016, a drop in global oil prices pushed Nigeria into a painful recession that made diversifying energy resources and the economy a priority.

However, to stimulate other industries such as agriculture, food processing, construction and technology, Nigeria needs electricity.

Ramping up renewable energy and moving away from generators would also reduce greenhouse gas emissions and hazardous particulate matter known as black carbon. There are “huge carbon dioxide emissions” in unelectrified areas that depend on generators, said Ms. Hommers of GiZ. “That really is a huge burden on climate change.”

Yet solar mini-grids are no silver bullet. To be sustainable, companies must have enough paying customers, preferably commercial users who demand more power.

“We need to stimulate more demand,” Bolade Soremekun, chief executive of Rubitec, said of the Gbamu Gbamu mini-grid. “It’s not just about having lights and charging phones. If people use electricity for productive use, it can earn more money.”

Electricity from the mini-grid costs about 150 to 200 naira per kilowatt-hour compared with 25 to 30 naira from the national grid. However, mini-grid power is still cheaper than fuel for generators and more convenient and reliable. As equipment costs come down and companies add customers, electricity prices could come down. And solar can be more reliable than the national grid.

If all goes smoothly, actual mini-grid construction can take less than one month — far less time than building a hydropower plant.

In Gbamu Gbamu, Rukayat Lawal works at Kadet Agro, a small business that dries cocoa beans in a large metal machine. Over its roar, she explained that the company used to spend at least 7,000 naira for a 30-liter jug of gasoline to dry 100 large sacks of cocoa. Now, Kadet Agro spends about 5,000 naira to do the same work. 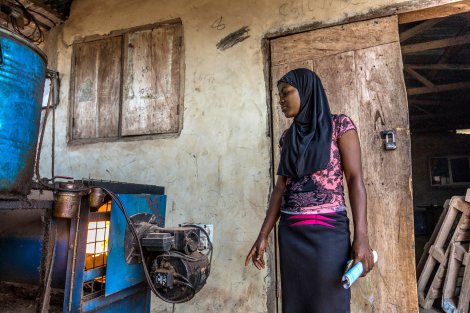 Ms. Lawal is relieved that she no longer has to spend two hours to go to town and fetch gasoline jugs on a motorbike. And at home, “we use fans, watch TV, we charge our phones,” she added. In the village, people often sleep outside to escape the stifling heat indoors. With solar-electricity fans, “now we can sleep inside,” she said. “We enjoy the solar very well.”